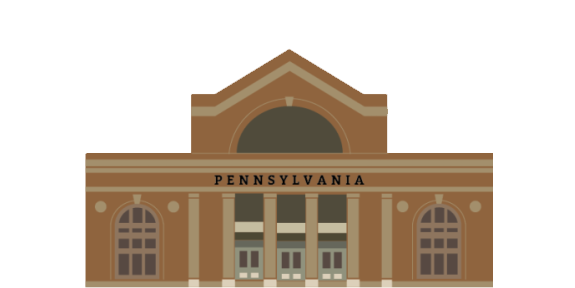 The Johnstown Train Station is located in what was once Millville Borough, one of the municipalities consolidated into the City of Johnstown in 1889. Early in the 20th century, the area became Johnstown’s first Jewish neighborhood, and the city’s first synagogue was built across the street from it.

The current station is actually the third train station built in that location. It was meant to mark Johnstown as an important place in the steel industry, and was designed by Kenneth Murchison, who studied in Paris and specialized in train stations with Beaux Arts designs, with a few Neoclassical elements. It was dedicated on October 12, 1916, in a grand ceremony with several speakers and music. Commemorative pennants featured an image of the station, the year, and the program of events.

As the Rev. Walter Burnett noted in his speech that day, “A large shed would have served our actual needs as a station. But the Pennsylvania Railroad built this artistic and stately structure that their building might harmonize with the finer spirit, no less real than the steel in our furnaces and the smoke from our stacks that exists in our city’s life.”

The station has witnessed countless arrivals and departures since, and was owned by the Pennsylvania Railroad until 1977. At that point, the company and the station became a part of Conrail. The building was sold to the first of two private owners in 1985.

Historic images of the station