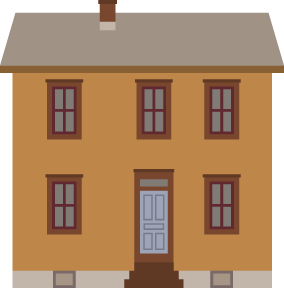 Wagner-Ritter House
Restoration of the House

The restoration of the Wagner-Ritter House and Garden began in 1991, when it was donated to the Johnstown Area Heritage Association. Based on extensive research, JAHA has worked to restore the house as it originally appeared. Some 22 layers of paint were removed from the front of the house to reveal its first unified color scheme, a yellow ochre color. Layers of wallpaper were stripped to discover the first, vibrantly-colored wallpaper, which had been applied directly over the plank walls. The paint colors and wallpaper have been reproduced and applied. Decorative wood elements, including moldings, wainscoting, and interior doors have been conserved and restored.

In addition, many of the house’s original furnishings were donated by the Ritter family along with the structure itself. These have been restored, and complemented by additional items, including a pot-bellied stove typical of 19th-century household equipment. From 1991-1992, Johnstown’s first-ever archeological dig was conducted on the house’s backyard with the help of more than 70 volunteers and professional archeologists. More than 23,000 artifacts were recovered, including bits of glass and crockery, fired clay pipes, and children’s small toys such as jacks and marbles. The dig unearthed thousands of soda pop bottle shards, remnants of the Wagner brothers’ failed soda pop bottling business. The project also showed that the elevation of the yard has changed over time, revealing an ash pathway from the house to the back of the building, some 18 inches below the yard’s current surface. A selection of the most significant artifacts from the dig is included in the visitor center exhibit, “The World of the Wagners.” With the help of the Johnstown Garden Club, a typical 19th-century Pennsylvania German raised bed garden has been planted. Finally, several outbuildings, including a barn, privy, and a bake oven shelter have been recreated based on historic and archeological evidence.