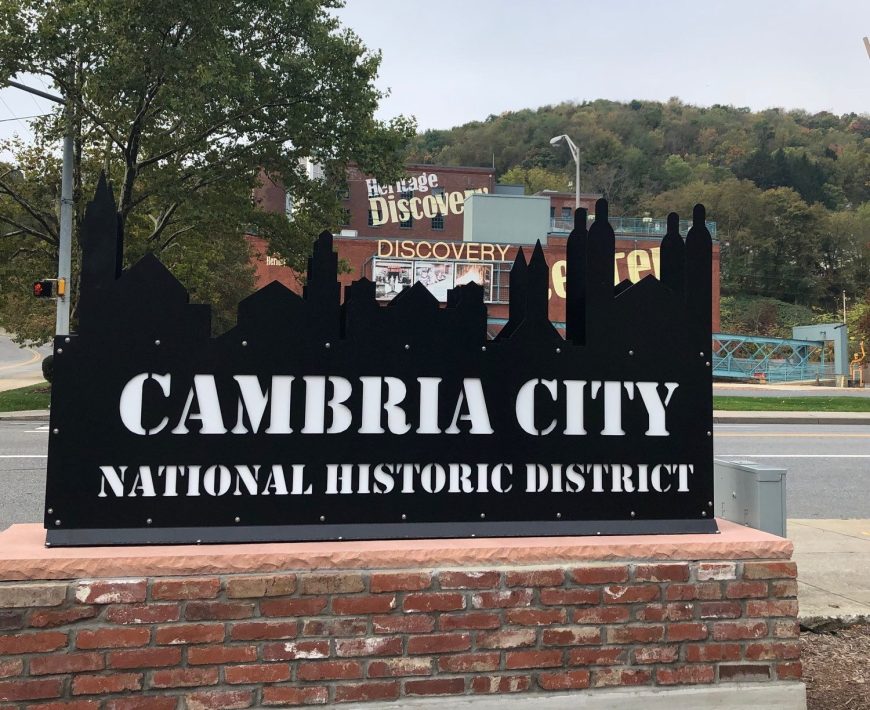 The idea of having a sign to welcome people to the Cambria City National Historic District was proposed in the design charrettes JAHA held more than 10 years ago to address the future of several of the district’s ethnic Catholic church buildings. With the help of many community partners, this idea has finally become a reality! The lighted sign stands at the corner of 6th & Broad Streets, directly across the street from the Heritage Discovery Center.

JAHA coordinated the project, while the cut steel sign was designed and manufactured by JWF Industries, whose plant is located on the former Cambria Iron Works. Stella, Property Development and Event Production (which is also today the owner of the former Casimir & Emerich Church), designed the Cambria City logo and contributed bricks. Danchanko Concrete donated labor for the concrete base, while students of the Greater Johnstown Career & Technology Center completed brick work on the base. Landscape design is by Ryan Kieta of Vision 2025, and the Community Foundation for the Alleghenies contributed grant funding. Kevin Masciantonio of Perfectly Imperfect Pizza has volunteered to pay for the electricity needed to light the sign. The City of Johnstown, Bureau of Public Works has also provided critical support.

JAHA is grateful to everyone who played a role in making this project happen!