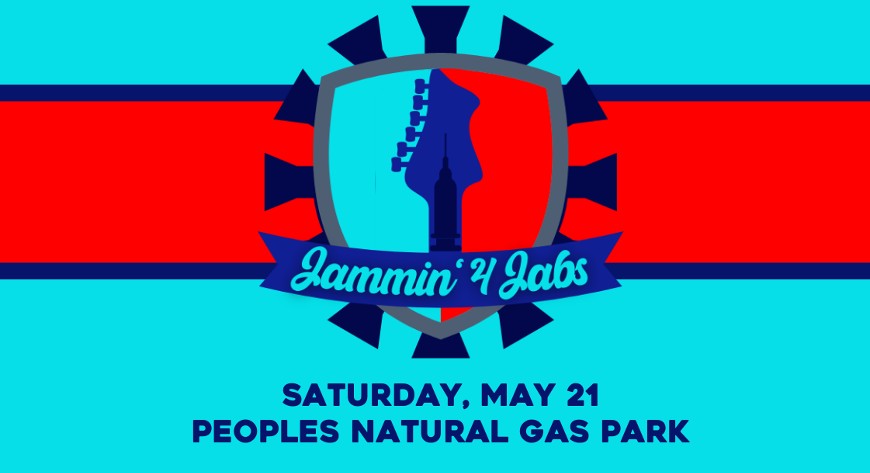 The University of Pittsburgh at Johnstown, In This Together Cambria, and The Tribune-Democrat are collaborating to present Jammin’ 4 Jabs, a special day at Peoples Natural Gas Park to reward, encourage, and get people talking about vaccination against COVID-19. The May 21 concert event will feature the Classic Vinyl Concert Series Band presenting Stevie Wonder’s “Songs in the Key of Life” with special guest Smooth Sound. A 7- element bouncy obstacle course and a climbing wall will be available for kids.

Admission to Jammin’ 4 Jabs, which is free, is open to anyone who shows their vaccine card or gets a free vaccination on-site. Children who are under the age of 5 and therefore unable to be vaccinated are also welcome to attend.

Highlands Health will be on hand to provide Pfizer vaccinations. First, second, and booster vaccines will be available for eligible children and adults.

“From the beginning, we had hoped to have a special event based around vaccination, and Peoples Natural Gas Park is a great open-air venue for the purpose,” said Dr. Jill Henning of In This Together Cambria. “Our county vaccination rate is approximately 55%– we have room for improvement, but we are still leading our area. We want to continue the positive momentum.”

Henning noted that new variants are circulating, and that the best way to avoid serious illness – and to help prevent future variants — is to be fully vaccinated, including boosters.

A second booster shot is now recommended for certain populations:

The schedule for the day is as follows:

The Classic Vinyl Concert Series Band will present Stevie Wonder’s “Songs in the Key of Life” in its entirety, under the direction of Jeff Webb, a reprise of the sold-out performance that was presented at the State Theater of Johnstown in February. Released in 1976, this double album was a magnum opus featuring a wide range of musical styles, with songwriting highlighting Stevie’s childhood recollections, views on social issues, expressions of faith and desire for love. The album’s hits include “Isn’t She Lovely,” “I Wish,” and “Sir Duke” An immediate critical success, “Songs in the Key of Life” was Wonder’s best-selling album and won a Grammy for best album. The Classic Vinyl Concert Series Band is made up of more than 25 local musicians who play classic and influential albums in their entirety.

Smooth Sound has been playing jazz, R&B, and classic rock in Johnstown since its 2011 founding. As shows have grown, their fan base has as well and ranges from eight years of age to 88. In addition, the band’s library of music has increased and includes hip-hop, rap, reggae and funk along with original compositions.

For admission, patrons must either agree to get a COVID vaccination onsite, or show their vaccine cards along with some form of ID. (If you do not have a government-issued ID such as a driver’s license, a piece of official mail such as a utility bill is acceptable.) Anyone who wishes to buy adult beverages will need to show ID, regardless of age or appearance.

The 1889 Jefferson Center for Population Health, Highmark Wholecare, The Center for Independent Living, and All of Us will be exhibiting inside the Community Foundation Oilhouse. Free COVID-19 home tests will be distributed by the Pennsylvania Department of Health.

Rayne’s Backyard BBQ will be onsite, and beer will be available for purchase. Jammin’ 4 Jabs is being produced with support from the Johnstown Area Heritage Association, which owns Peoples Natural Gas Park.