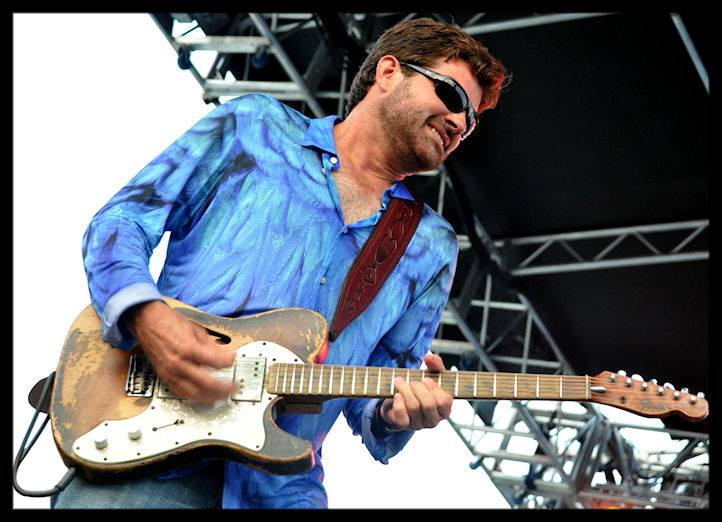 Flair of Country will be on location with their food truck wide selection of items for dinner, including their famous barbeque items.

The schedule for the evening is as follows:

Tickets for the event are $20 (face value) in advance, or $25 (face value) the day of the show. They are being sold in advance through ShowClix — get them at the button below!

Tab Benoit is a Cajun man who’s definitely got the blues. He grew up in Houma, Louisiana, where he picked up a guitar as a young teenager and began hanging out at the Blues Box, a ramshackle music club and cultural center in nearby Baton Rouge run by guitarist Tabby Thomas. Playing guitar alongside Thomas, Raful Neal, Henry Gray and other high-profile regulars at the club, Benoit learned the blues first-hand from a faculty of living blues legends.

The nightly impromptu gigs were enough to inspire Benoit to assemble his own band – a stripped down bass-and-drums unit propelled by his solid guitar skills and leathery, Cajun-spiced vocal attack. He took his show on the road in the early ‘90s and hasn’t stopped since. He’s released 21 discs, has been inducted into the Louisiana Music Hall of Fame, and has received countless accolades – including the B.B. King Entertainer of the Year Award (2007, 2012).

He first played for Johnstown at the Johnstown FolkFest in 1997, and returned to the AmeriServ Flood City Music Festival in 2011 and 2016. He also played the opening celebration for the new Peoples Natural Gas Park in 2012. (Photo credits: Kevin Stiffler) Eric Johanson: New Orleans based Eric Johanson was tearing up nightclub stages in Louisiana with his soulful blues guitar before he finished high school. He has toured across the US and internationally as lead guitarist for the legendary Cyril Neville, Grammy-winning Zydeco artist Terrance Simien, and performed onstage with Tab Benoit, JJ Grey & Mofro, Eric Lindell, Mike Zito, Anders Osborne, the Neville Brothers, and many more.

Recently signed to Whiskey Bayou Records, his debut album was produced and engineered by Tab Benoit at his studio in Houma, featuring Tab on drums, and Corey Duplechin on bass. Following its release in October of 2017, Eric has been touring across the US supporting Tab Benoit at sold out theaters and performance halls. Black Cat Moan: Consisting of TK Mundok on vocals & harp and George Byich on guitar, Black Cat Moan brings to life a music that harkens back to early folk field recordings. Since forming in 2013,this original blues/roots group has been gaining a following playing clubs and festival in and around Western PA and in 2016 took home first place at the Northern West Virginia inaugural Blues Challenge, giving them the opportunity to perform at The International Blues Challenge that takes place on Beale St in Memphis TN. Drawing inspiration from early blues performers and the kings of Chess Records Black Cat Moan does not mimic artists of a past era but instead brings a new vibe to a classic art form.