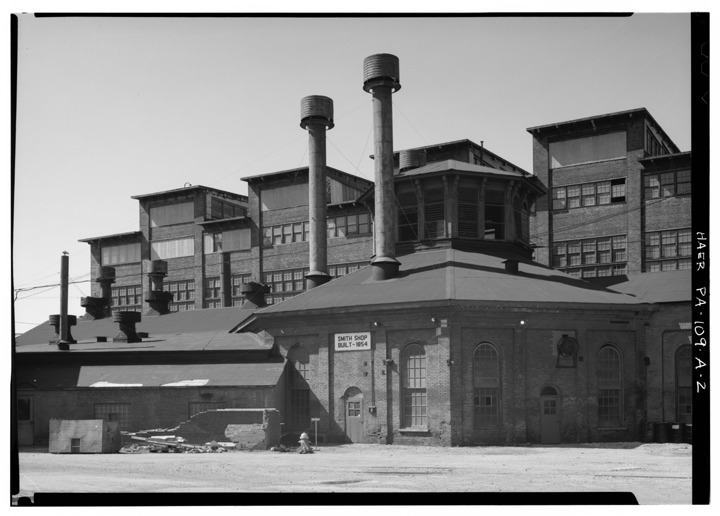 The Blacksmith Shop, which was built ca. 1862, is the most important historical structure that survives in the Cambria Iron & Steel National Historic Landmark. The shop made tools and equipment used in other sections of the Cambria/Bethlehem steelworks. When the building was threatened with demolition in 1994, JAHA successfully sought David McCullough’s assistance in supporting the building’s preservation. Eventually, about half of the Lower Cambria Works, including the Blacksmith Shop, was transferred from Bethlehem Steel to the Johnstown Redevelopment Authority.

JAHA has long recognized its importance, and in 2004 obtained a Save America’s Treasures grant of $292,836 from the National Park Service to stabilize the structure. This included restoring the handmade brickwork using historically accurate methods; replacement of the roof and stabilization of the cupola; installing drainage, and other items. The Johnstown Redevelopment Authority also received brownfield grant funding, which was used to install a concrete floor, mitigate environmental issues, and repair historic doors and windows. A DCED First Industries Tourism Planning Grant of $178,950 was obtained by JAHA and used to hire a consultant to conduct a feasibility study and business plan on the Blacksmith Shop, which brought the resource to the attention of hundreds of interested parties. Work remaining to be done includes the reinstallation of utilities – compressed air, electricity, natural gas, and water.

We are delighted that the Center for Metal Arts of New York has proposed opening an educational center in the Blacksmith Shop, which continues to be owned by the Johnstown Redevelopment Authority. Patrick Quinn, a principal of CMA, contacted JAHA when he saw images of the Blacksmith Shop we posted online. The school plans to offer educational programs open to the public, as well as specialized training for professional blacksmiths — it will also do commissioned work, and sponsor residencies. It will take time, but equipment in the shop (some of which is in place; other items are in storage) will be refurbished and used, including the shop’s five steam hammers (one is a 10-ton hammer that’s so significant that the Smithsonian Institute owns it).

The organization plans to begin offering classes as soon as late February, and as many as 275 people will take part by the end of the year. A recent Tribune-Democrat article has more about plans for the school.