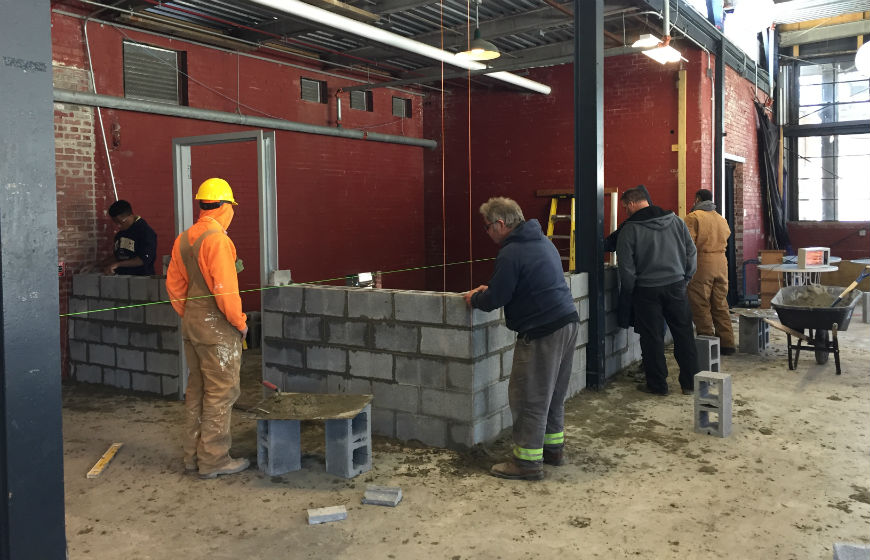 Peoples Natural Gas Park is being improved with a new catering kitchen, thanks to the generosity of several organizations. The kitchen will allow a permanent location for simple food to be served during public and private events.

“A kitchen was part of the original plans for the park, and we’re glad to be able to complete this needed improvement in time for the summer events season,” said Richard Burkert, president and CEO of the Johnstown Area Heritage Association (JAHA), which owns the park. “We are deeply grateful to all the organizations that are helping make it happen through in-kind donations of equipment and labor.”

The kitchen will be located inside the The Community Foundation Oilhouse. It will include food preparation areas, sinks, a refrigerator, and other restaurant equipment.

Building trade and maintenance students from the Greater Johnstown High School are building the wall needed to enclose the kitchen space. The project was coordinated by high school principal and vocational director Frank Frontino.

“This is the kind of greatness that our city leaders will see when they believe in our young people and give them a chance to show their skills on projects that have an impact on serving people in their community,” Frontino said. “Give our students the chance they deserve and they will show you over and over, again and again, how much they love their community. Trust in them and they will show you all the good that can happen when everyone in the community is pulling in the same direction. ”

Greater Johnstown Career & Technology Center students will be responsible for flooring, ceiling, lighting, electrical, and painting. The student work was coordinated by John Augustine, administrative director. Laurel Plumbing & HVAC is donating equipment, such as a water heater and sinks, and installing the plumbing. Finally, Sheetz is donating kitchen appliances and stainless steel counters and accessories.

The project was also made possible by a generous donation from 1st Summit Bank, which was used to fund engineering plans and supplies.

The kitchen is expected to be completed by late May.

Ron Carnevali, former festival chairman and longtime JAHA supporter, created a Facebook fundraiser to support the project — click on the button below to support his effort!

Donate to the project