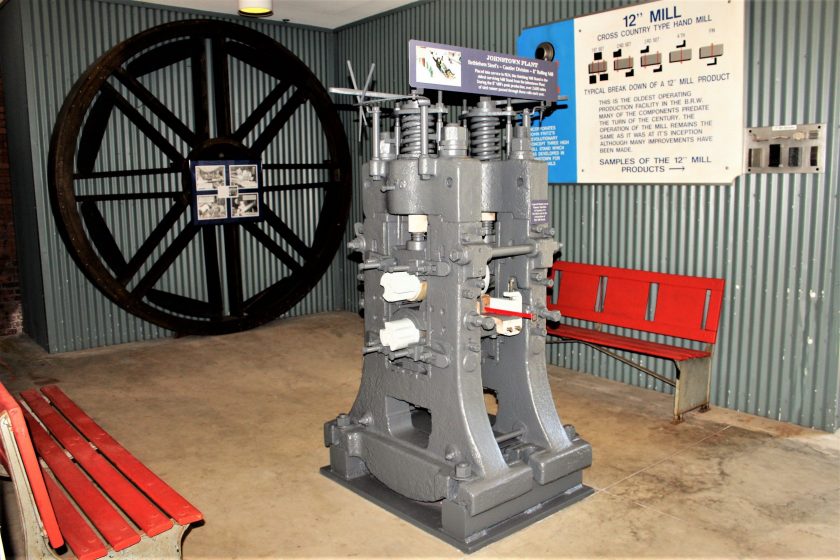 An 8” rolling mill stand from Bethlehem Steel’s Gautier Division has been restored and moved to the Heritage Discovery Center, just outside the entrance of the Iron & Steel Gallery.

Placed into service in 1924, it is one of the oldest surviving rolling mill stands from the Johnstown plant. During its peak production, more than 2,600 miles of sled runner was rolled through the mill annually. It is one of just a few hand mills that survive – billets were fed into the rolls by hand, rather than by more modern methods. In fact, the very last piece of sled rail remains in the rolls.

“Just about any child’s sled produced up through the early 70s for brands like Flexible Flyer and Silver Streak used runners rolled right here in Johnstown,” said Tom Leslie, who spearheaded the effort to restore the mill.

The mill was donated to JAHA by Bethlehem Steel in the late 1970s, when it was placed on the lawn of the Johnstown Flood Museum. But over time weather took its toll.

In fall 2019 Ramsey Machine of Ligonier removed the mill from the Johnstown Flood Museum lawn to its shop, where it was sandblasted and primed before being moved to the Heritage Discovery Center. An interpretive label has been added.

“We’re grateful to Tom Leslie and John Ramsey of Ramsey Machine for their volunteer efforts in restoring this piece of Johnstown’s steel history,” said Richard Burkert, president and CEO of JAHA. “We are very happy to have it as part of our permanent display at the Heritage Discovery Center, where it is thematically appropriate and can be shown in a secure, sheltered space.”