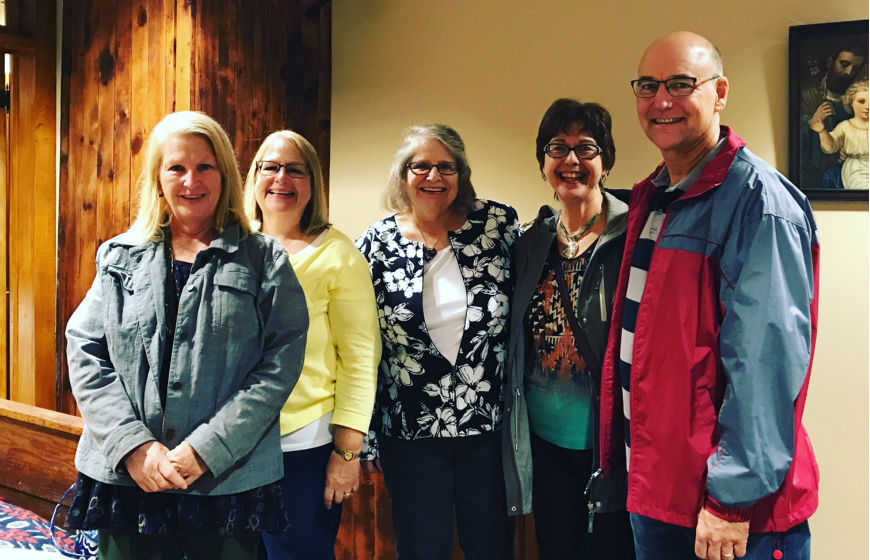 We were delighted to host several direct descendants of the Wagner-Ritter family at last week’s Nighttime Tour of the Wagner-Ritter House & Garden! In the photo above, from left to right: Pat Tresnicky, Marlene Henry, and Anne Strasner (they are sisters; their father was Robert Ritter, son of Joseph, whose mother was Anna Wagner Ritter); and Andrea and Ray Ritter (Ray is the son of Eugene, who was also a son of Joseph). All four were great-grandchildren of Anna Wagner Ritter, who was the only daughter of George and Franziska Wagner. Anna lived in the house as a child, and moved out upon her 1897 marriage to Joseph Ritter, a coal miner. By 1907 she was widowed and had returned to her parents’ home with her three small children, where she lived until her 1968 death at the age of 102. Anna’s grandsons Eugene and Robert Ritter, fathers of our visitors, donated the house to JAHA in the early 1990s. You can read more about the family here.

The four great-grandchildren have fond memories of visiting their great-grandmother at the house at milestone events such as first communion, and of getting their photos taken with her. They shared a Tribune-Democrat photo taken of Anna, her adult daughter Marie (who lived in the house), and a staff member from the Social Security Administration who had visited to give Anna a special certificate for her 100th birthday. They also remember their Uncle Louis, who lived in the house with his mother and sister, and calling him “Uncle Bo.”

The Ritter descendants promised to keep in touch, and update the family tree for our records. We’re grateful for their support, memories, and their visit!

If you’ve not yet toured the Wagner-Ritter House, one more evening tour is scheduled for Thursday, October 26, 2017.