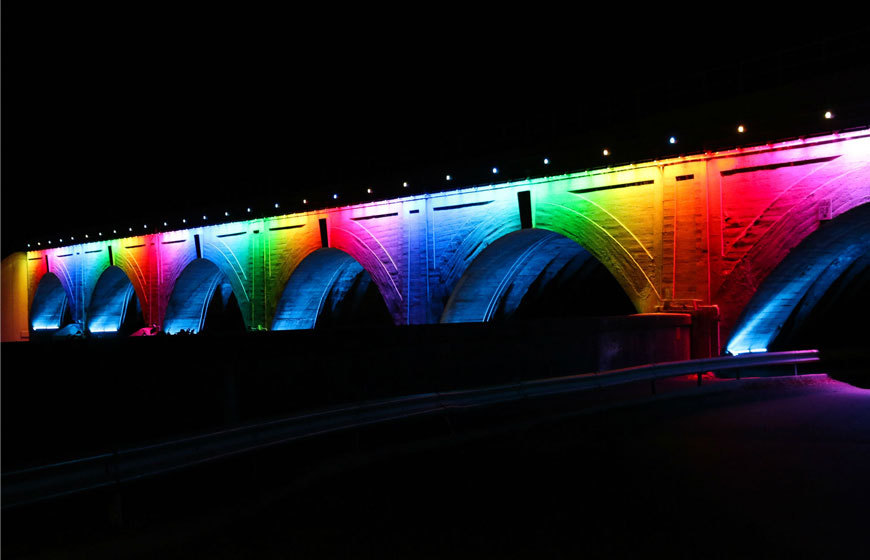 An icon of the 1889 flood, the famous Stone Bridge is a symbol of our community’s resilience and strength. Since the 2011 dedication of the Stone Bridge Lighting Project, the bridge has been illuminated in colorful LED lights programmed by JAHA. Now the Stone Bridge Project Committee is launching a $30,000 fundraising effort to sustain and perpetuate the beautiful lighting.

“We have also added a live webcam, and JAHA regularly hears from people who have expressed their thankfulness for being able to see the vibrancy of the community they love reflected in the lights on the Stone Bridge. People love to see the lights, locally and all over the world,” said Richard Burkert, president of JAHA and project co-chairman.

Ten years have passed since the Stone Bridge Project Committee began the fundraising for the original project, which included design and installation as well as maintenance and electricity costs thus far. Cash and in-kind donations by a wide range of organizations, including JWFI, the Community Foundation for the Alleghenies, Laurel Management Company, ENMACON, and Top Dog Productions have been critical as well.

Project co-chairman Mike Brosig has kicked off the current fundraising effort by donating $10,000, and an additional $2,500 has also been donated. That means the committee is almost halfway to its $30,000 goal. Fundraising letters are being sent this week to area businesses and individuals as the public part of the campaign gets underway.

“The original project was supported by hundreds of businesses and individuals,” Mike Brosig said. “Every donation counts, and we’re asking people to help us sustain the lights for years to come.”

Any individual or company interested in helping with the fundraising committee by donating their time and efforts can contact Deb Winterscheidt at JAHA at 814-539-1889. You can also contact Mike Brosig directly by calling 814-659-2733, or brosigm@laurelholdings.com.