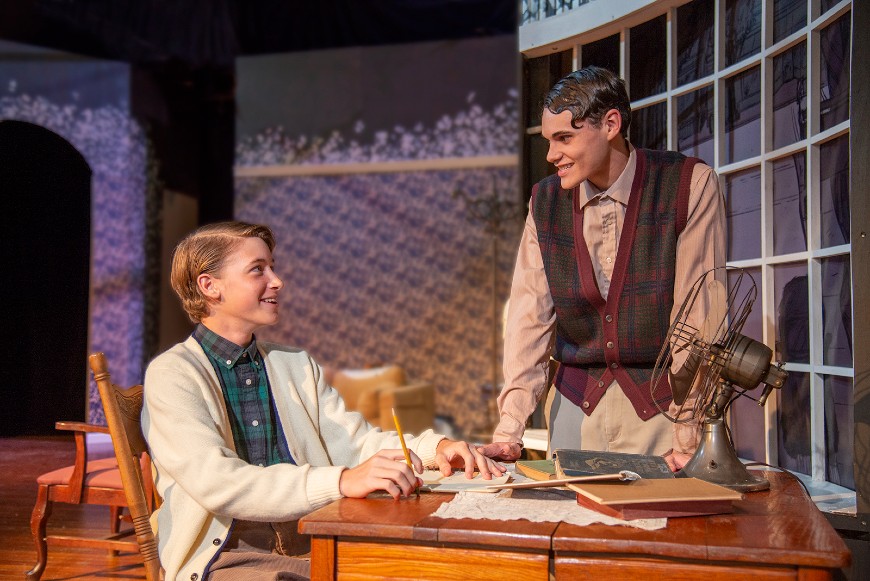 Stone Bridge Players remains dedicated to producing high-quality performances that highlight the area’s local talent. “Lost in Yonkers” will mark their 14th performance in the city of Johnstown since the company’s inception in 2006.

The company’s Artistic Director, Dr. Rodney Eatman, described “Lost in Yonkers” as a serious play set in the year 1942. Although Simon is well-known for his comedic plays, including “Barefoot in the Park” and “The Odd Couple,” this one is more mellow, less slapstick. It earned Simon a Pulitzer Prize for drama in 1991 and was also recognized by the Oscars and Tony Awards.

Eatman, who served as University of Pittsburgh at Johnstown’s theatre director from 1978 until his retirement in 2009, reiterated that the famous playwright’s “surefooted structure” and “snappy dialogue” are still present, but Simon added complicated layers that inspire audiences to sympathize with each character on a deeper level.

The main characters in the play are teenage brothers Arty and Jay. Their mother has just passed away, and their strapped-for-cash single dad has no choice but to ask his mother to take them in despite her reservations. It’s their father’s sister—Aunt Bella—who convinces Arty’s and Jay’s grandmother to welcome them into her apartment in Yonkers.

“This play is a coming-of-age story, a story about how different generations interact with one another,” Eatman said, noting that when casting began this summer, he knew he needed to find two young men who would be willing to put in the rehearsal time, step into the spotlight and work hard to bring these characters to life.

When Ford and Fisher auditioned, Eatman knew that he had found what he was looking for; both actors impressed him with their enthusiasm for the script and commanding stage presence. “Both of them have theatre experience and knew exactly what they were getting into,” Eatman said. “They’ve never played roles this big, but they’re rising to the challenge. They’re carrying a lot of responsibility and there’s a lot riding on their performances.”

Ford portrays Jay, the strong-willed elder brother who wants to set a good example, yet struggles to gain a sense of maturity. A senior at Richland High School, Ford has performed in numerous school productions, including Disney’s “Descendants: The Musical” and “The SpongeBob Musical!” He and his classmates are currently rehearsing for their theatre department’s fall play, Shakespeare’s “Twelfth Night,” in which he’s been cast as Sir Andrew.

“At Richland, we’re lucky enough to get involved in theatre as early as fifth grade,” Ford said. “My first performance was in ‘Wizard of Oz,’ and ever since then, I’ve been really into it. I really like the theatre community. It’s a way for me to hang out with my friends and, as I’ve gotten older, it’s become a way for me to express myself.”

Arty is being portrayed by Fisher, a student at PA Cyber School. His previous productions include “Oliver!” and “Crazy for You,” both of which were produced by North Star School District’s theatre department. Fisher was also cast in “Joseph and the Technicolor Dreamcoat” at Mountain Playhouse in Cresson. Fisher’s character, Arty, is an observant type who creates his own unique ways of coping with the living situation that his father hastily arranged.

Fisher’s mother, Tamera Gindlesperger-Fisher, is playing the role of Aunt Bella in “Lost in Yonkers.” Ironically, Gindlesperger-Fisher directed her son and Ford in two separate productions of Disney’s “The Descendants.” Her son portrayed Jay in the play presented by The Potter’s Players in the fall of 2020, and this past summer, she worked with Ford when he portrayed Carlos during Richland High School’s summer theatre program.

Gindlesperger-Fisher said it’s a strange coincidence that both her son and Ford played opposite leads in the same play, and now they’re getting to work together for “Lost in Yonkers.” She added that it’s been fun to watch their synergy develop. “They definitely have a professionalism about them—a maturity for their ages, and an obvious respect for and understanding of theatre,” she said.

Fisher credits his mother for encouraging him to pursue his interest in acting.

“She was always taking me to plays and musicals,” Fisher said. “It’s been fun to share the stage with my mom for this play. She makes it easier to play my role.”

“Lost in Yonkers” will mark both Fisher’s and Ford’s debut with Stone Bridge Players. They said they love being onstage, being in the moment and being surrounded by adults who consistently encourage them.

“The adults really dig into their characters,” Ford said, “and they’ve really helped us step up our game.”

Playing the lead roles in “Lost in Yonkers” isn’t, well, lost on either of them.

“This is a really exciting opportunity for both of us,” Ford said. “We would both like to participate in more community theatre and get ourselves out there, and this is definitely a great way to do that.”

In addition to their participation in school and community theatre, Ford and Fisher are active in their schools. Ford is a member of his school’s Executive Board and Student Council, and was recently elected to the Homecoming Court. Fisher plays soccer for North Star High School. They acknowledged that juggling play rehearsals with their schoolwork and extracurricular obligations has been challenging, but they’re committed to seeing this play through and doing their characters justice.

As opening night draws nearer, Ford and Fisher said they can’t wait to see new and familiar faces in the audience during the play’s eight-show run.

“I’m excited about the performances, and about everything coming together,” Fisher said. “We all want it to be as good as it can be.”

In addition to Ford, Fisher, and Gindlesperger-Fisher, the cast of “Lost in Yonkers” is rounded out by Jacob St. Clair as Eddie; Jeanne LaPorta-Clark as Grandma Kurnitz; Matt Tracey as Louie; and Jayme St. Clair as Gert.

Eatman is assisted by Producer David Ward and Assistant Director/Stage Manager Dan Morgan, as well as Sound and Lighting Engineer Tom Brubaker and Costumer Maggie Kelly. Madeline Gyure and Suzan Mulkey are providing Stage Properties. In addition to the actors and production staff, Eatman acknowledged the set designers, builders, backstage crew, and the staff at Johnstown Area Heritage Association (JAHA) for helping to bring the play to fruition.

Stone Bridge Players have partnered with JAHA since 2011; this will be their 11th production on the third floor of the Flood Museum—an intimate space that was originally built to serve as an elegant gymnasium. Proceeds from “Lost in Yonkers” will be donated to the non-profit, which, in addition to Johnstown Flood Museum, owns and operates Heritage Discovery Center, Johnstown Children’s Museum, Peoples Natural Gas Park and other prominent tourist attractions in the city.

“This is arguably Neil Simon’s finest play,” Eatman said. “We’re glad to be able to continue to support JAHA, and we’re happy that we are performing downtown in this great space. We think that we’re doing a good service to this community because theatre is a marvelous experience.

“Figuratively speaking, theatre asks you to take your eyes out of their sockets and put the characters’ eyes in. Theatre makes you think about how somebody else feels, makes you ask, ‘What would I do in this situation?’ I think the world needs that . . . that understanding of the human condition—not just for you and the people you love, but for everybody. That’s a major contribution that theatre can make to our community and, in a broader sense, to our society.”