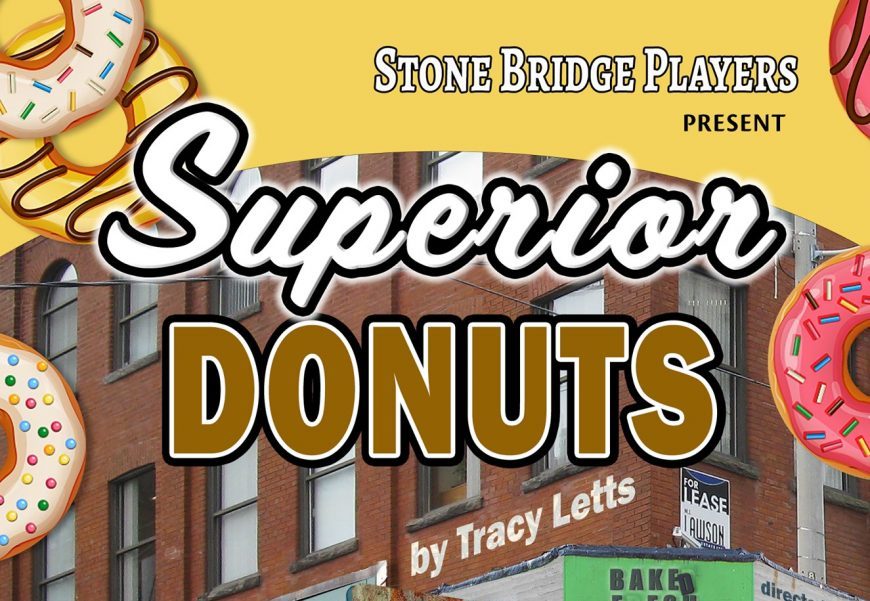 The Stone Bridge Players return for their seventh show at the Johnstown Flood Museum with Superior Donuts, a comedy by Tracy Letts! Directed by Rodney Eatman, the curtain for all eight performances is 7:00 pm.

Arthur Przybyszewski runs a shabby donut shop he inherited from his immigrant father in a historic but rundown Chicago neighborhood. At the beginning of the play, a vandal has broken the shop window, but Arthur is too depressed to care. His ex-wife recently died, and he’s haunted by his decision to flee to Canada during the Vietnam War. Enter Franco Wicks, a livewire 21-year-old who applies for a job and immediately envisions ways to spruce up the shop—and help his boss attract the attention of a lady cop. As folks from the neighborhood come and go and secrets are revealed about Arthur and Franco, the two men find their lives changing in unexpected ways.

The inaugural show for the Stone Bridge Players at the Johnstown Flood Museum was Vanya, Sonia, Masha and Spike, in 2014. Other past shows include Wait until Dark (2017); Harvey (2018), It Runs in the Family and Quartermaine’s Terms (2019), and the musical Lucky Stiff (2014).

General admission tickets are $20 (not including handling fees). Advance tickets may be purchased through EventGroove at https://events.eventgroove.com/event/Superior-Donuts-54613 or at www.jaha.org, or by phone, 814-539-1889. Tickets may also be purchased at the door.

Masks are required to attend. The room capacity has been reduced to allow for better distancing.

Rodney Eatman directed 91 plays as Director of Theatre at Pitt-Johnstown and holds theatre degrees from Baylor University, the University of Texas, and the University of Michigan. He did additional study at American Conservatory Theatre, San Francisco. In 2003 he received the Chancellor’s Distinguished Teaching Award from the University of Pittsburgh. For two seasons he was a directorial assistant Off-Broadway at Abingdon Theatre in New York. He directed productions at Cresson Lake Playhouse as well as a series of five musicals for the Johnstown Symphony. He was both a director and actor at Fondren Street Theatre, Houston, and at the Michigan Repertory, Ann Arbor. He has played roles in five plays at Mountain Playhouse. Prior to his post at Pitt he directed and taught acting and voice/diction at the University of Michigan, Texas University at San Marcos, Lon Morris College, and the University of Texas at Austin. In 2009 he was inducted into the Bottleworks Artists Hall of Fame. He has performed in a number of television commercials, films, and voiceovers. Currently, he is a music associate at Westmont Presbyterian Church and plays piano in the Atrium at Conemaugh Hospital and synthesizer for Westmont Farmer’s Market. Recently Mr. Eatman directed A Steady Rain and Doubt at Bottleworks Ethnic Arts Center, and for Westmont Hilltop High School, Lost in Yonkers, Wilder and Wilder, Crimes of the Heart, The Rimers of Eldritch, The Dining Room, The Prime of Miss Jean Brodie, and The Silver Whistle.