The Stone Bridge
Location and Directions

Where to view the lights 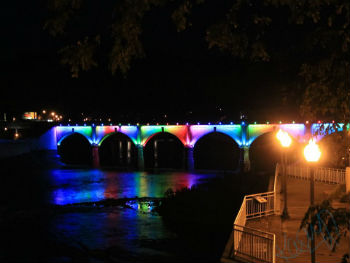 Motorists get a great view of the bridge lights as they pass along Route 56, the most heavily-traveled road in Cambria County. But if you’d like to view the lights for a longer period of time, the two best places are:

Point Park: This pocket park is located across the street from Point Stadium on Washington Street; the park is located at the confluence of the Little Conemaugh and the Stonycreek Rivers. A few parking places are available along Washington Street. The park is also the site of the eternal flame in memory of 1889 flood victims. The photo at right illustrates the relationship of Point Park and the bridge. 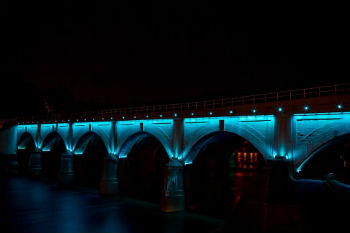 : There is room for a few cars to park on the Iron Street side of the bridge (which is the right side as you look at it), right next to one end of the bridge. Approach the bridge on Iron Street (from Johnstown’s downtown, over the Johns Street or Walnut Street Bridges), drive on Iron Street behind Peoples Natural Gas Park, and park next to the bridge; you can walk along the greenway beside the park to enjoy the view of the lights. The photo at left was taken from this vantage.

Photos on this page courtesy of Kasey Hagens and Brad Jones.