Here are the acts scheduled for the 2022 Slavic Fest!

We are delighted to present the 2022 talent! 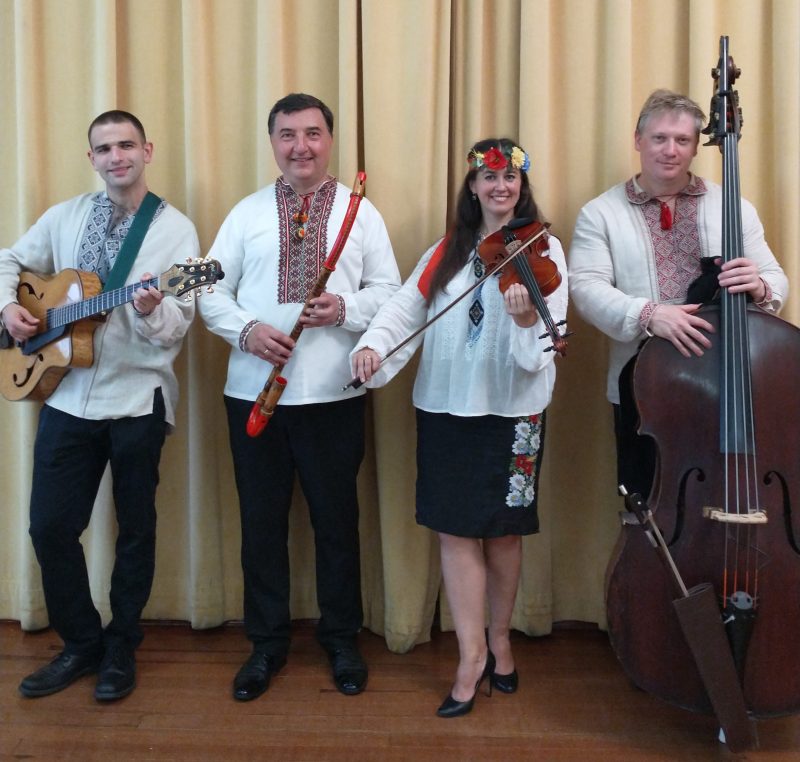 Gerdan – Kaleidoscope of World Music is a professional music ensemble based in Washington DC metropolitan area. Founded by Ukrainian professional duo Solomia Gorokhivska and Andrei Pidkivka, musicians of Gerdan bring the fire and the edge of melodic ideas and rhythms that capture the listener.

The ensemble is named after Gerdan, a multi-colored, intricately woven beaded necklace from Carpathian Mountains in Ukraine. Like this dazzling and exquisite necklace of different colors and shapes, musicians create original arrangements of traditional Ukrainian folk melodies and rhythms that reflect their passion for blending the old with the new, in a style that is fresh, lively, and beautiful. The exclusive collection of the Ukrainian authentic flutes in combination with other traditional and modern instruments create unforgettable musical experience. Gerdan’s musicians have been acknowledged for their technique and exquisite musical presentations performing an exciting Eastern European music repertoire. They reveal their passion for traditional music in their artistic expression to build cultural bridges in time and distance. 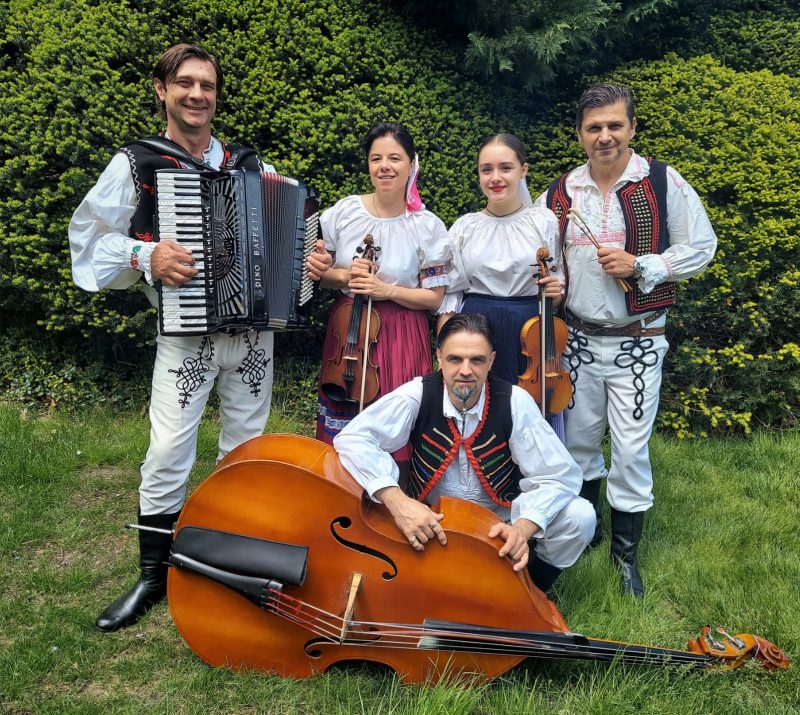 Pajtasi is a Slovak cimbalom band, founded in New York City in 1998-99, when two former colleagues, folk musicians from Slovakia met at the Slovak street festival in Manhattan.  Andrea Levrinc – Valcuha on a viola-contra/violin and Branislav Brinarsky on a bass/bandleader. At that time, they were also joined by Maros Kocerha on accordion/later on cimbalom and by the vocalist, Maria Lazurova- Dvorak. Nowadays the band works also with other musicians, especially with young “primáš” Isabella Valcuha.

Over the years the Pajtasi Band has played at numerous events: concerts, weddings and parties. The band has also participated at many Slovak and other international festivals, in New York, Massachusetts, Connecticut, New Jersey, Ohio, Michigan, Illinois, Minnesota, and Washington D.C.  In 2007, Pajtáši released their CD – “ The Devil’s Craft ”. Since its inception, the band has been performing with the prominent Slovak-American dance ensemble Limbora in NYC .The authentic sound of their folk instruments and folk music enrich the traditional folk dance performances.

The band’s repertoire covers vast regions of Slovakia, Moravia and the Czech Republic, as well as well-known international songs in their own arrangement. Their musicianship and many years of experience provide the audience with a high quality performance and a pleasurable listening experience. 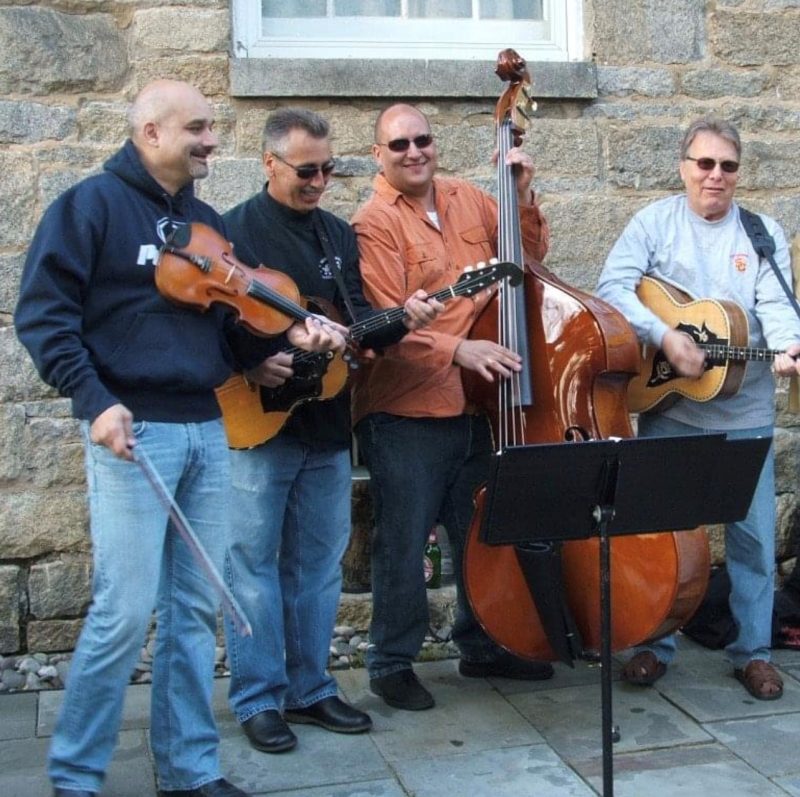 The members of Sviraj are life-long friends who grew up together in an ethnically diverse steel town in Pennsylvania. They learned the music of their culture and others through many, many performances, jam sessions and encounters with folk musicians from the ethnic communities in the United States and the Balkans.

Lenny Tepsich (Celo, Dumbek, Vocals) of Serbian and Croatian descent first played tambura with the St. Nicholas Junior Tamburitzans in Steelton in 1970. He played with a variety of tambura groups including the Balkan Brothers and Jorgovan. He’s been featured at balkan music dance camps and international folk festivals around the country. Lenny is also nationally recognized as singer/songwriter and children’s performer Mr. Music®. In addition to motivating kids through music, he is able to share his culture with his young audiences.

Chris Radanovic (Bass, Vocals) of Serbian descent, has been performing for over 15 years. He holds a Master of Arts degree in Performance from the University of Iowa. He has performed a wide range of genres from classical and musical theater to jazz and popular music. Chris also currently performs with the Central Pennsylvania Symphony Orchestra, the Center Stage Opera Company, and the St. Lawrence Adult Tamburitzans, all located in the Harrisburg, PA area.

Mike “Misko” Furjanic (Violin, Tamburica, Vocals) of Croatian descent, has been performing for over 25 years. As a child, Mike was taught to play the violin by his mother, who instructed him in several eastern European fiddle styles. Mike is currently the music director of Kolo Grupa “Marian” of Steelton, Pa., and he has performed with Croatian folk ensembles throughout the US, Canada, and Croatia. Mike has played and recorded with groups that perform styles of music ranging from classical to country and folk to rock.

Danilo Yanich (Bugarija, Accordion, Vocals) of Serbian descent, has performed for over 25 years. He is on the teaching staff of Balkan Music and Dance Camps and past president of the national board of the East European Folklife Center. He holds a Ph.D. in Urban Affairs and Public Policy and has published articles on Balkan politics. He is a professor at the Biden School of Public Policy, and Administration, University of Delaware . 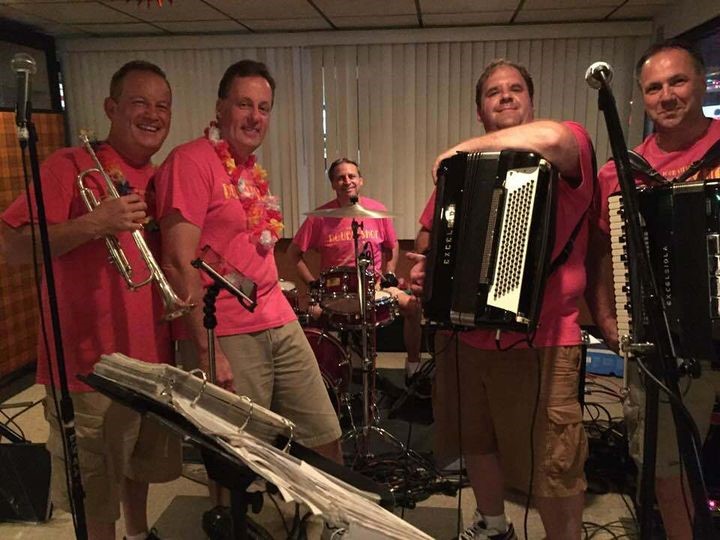 Not only is John Stevens a polka band but they can mix up the music to fit any occasion. The John Stevens polka band has had the chance to perform at such festivals as: Pillar Polkabration (CT), Pulaski’s Big Polka Celebration (WI), Polka Spree By The Sea (NJ), The Bethlehem Musikfest (PA), Polka Fireworks (PA), Polkamotion By The Ocean (MD), Posen Potato Festival(MI), IPA FESTIVAL (IL), Blocktoberfest(DC), The Cedar Polka Fest (MI), Kinde Polka Fest (MI), ST. Stans Festival (MI).

The band has also been on 2 Polka Cruises and currently has 18 cd releases. 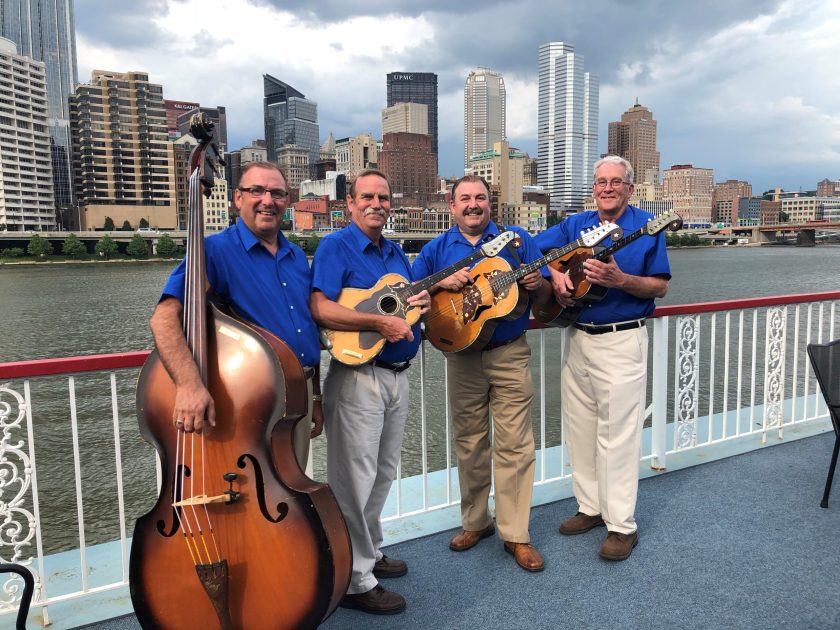 The Radost Tamburitza Orchestra was organized in 1987. For the past 35 years the orchestra has entertained audiences nationwide. The word Radost means joy. This orchestra performs for weddings, graduations, ethnic dances, cultural clubs, and picnics where they bring much joy to all who attend. Their last performance in Johnstown was at the National Folk Festival in 1990!

All four members of this orchestra have been inducted into the Tamburitza Association of America Hall of Fame.  Radost Orchestra consists of Joe Cindric on brač, Paul Milanovich on beglait, Dan Vranesevic on čelo, and Dave Vranesevic on bass. 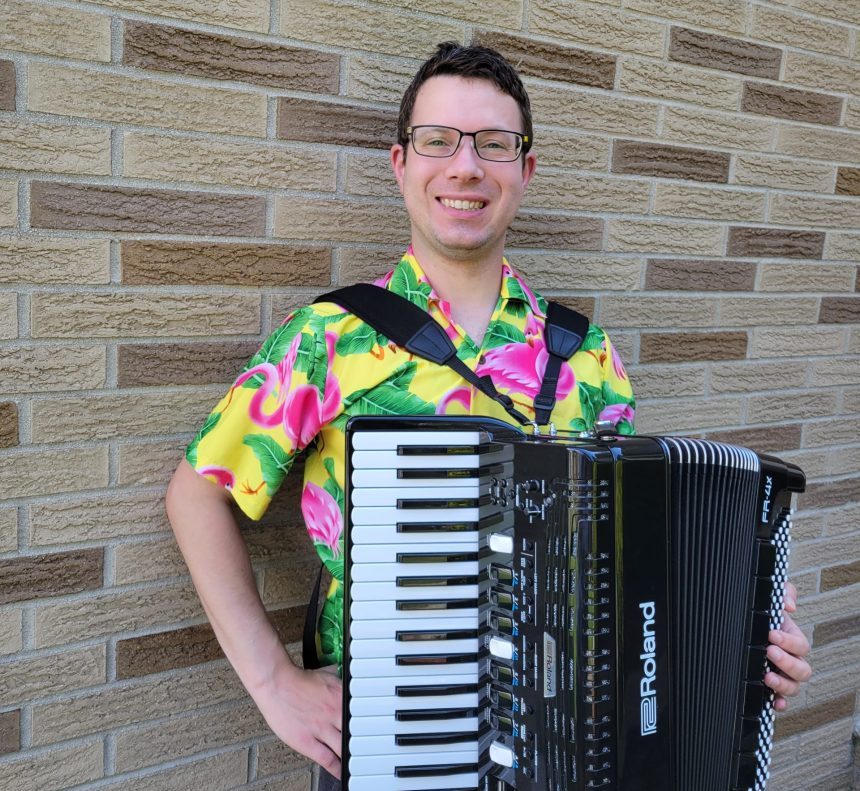 Jim Vizzini’s grandfather gave him an accordion, and he taught himself to play it! He will perform on his specially engineered accordion that actually sounds like a full orchestra. 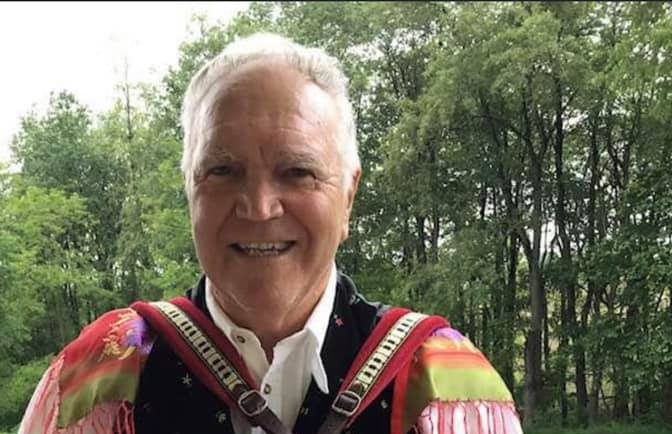 Johnstown’s own Bronco Toter will play a mix of Eastern European favorites. Bronco has a long history of performances with the Rhinelanders and has played throughout Pennsylvania. 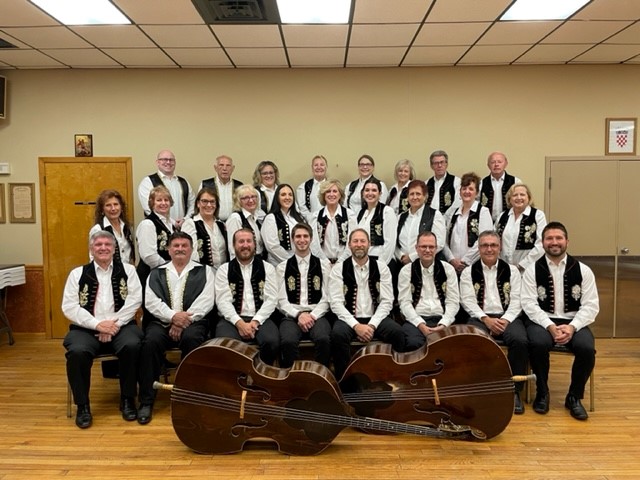 The St. George Adult Tamburitza Ensemble was officially organized in 1987 under the auspicious of St. George, Croatian Fraternal Union, Lodge #354 of Cokeburg, PA.

The ensemble performs at many cultural, civic, and fraternal events each year and has successfully hosted the St. George Velika Fešta Tamburaša ( Large Festival of Tamburitzans ) at the Croatian Home in Cokeburg every March for the past 28 years.

St. George has traveled extensively throughout the United States and regularly travels across the border to perform in Canada.  They have also have successfully completed 4 concert tours to Croatia in 1997, 2004, 2013 and 2018.

The ensemble is directed by Marlene Luketich Kochis and Daniel Kochis. Assisted by Bernadette Luketich-Sikaras and Derek Hohn. 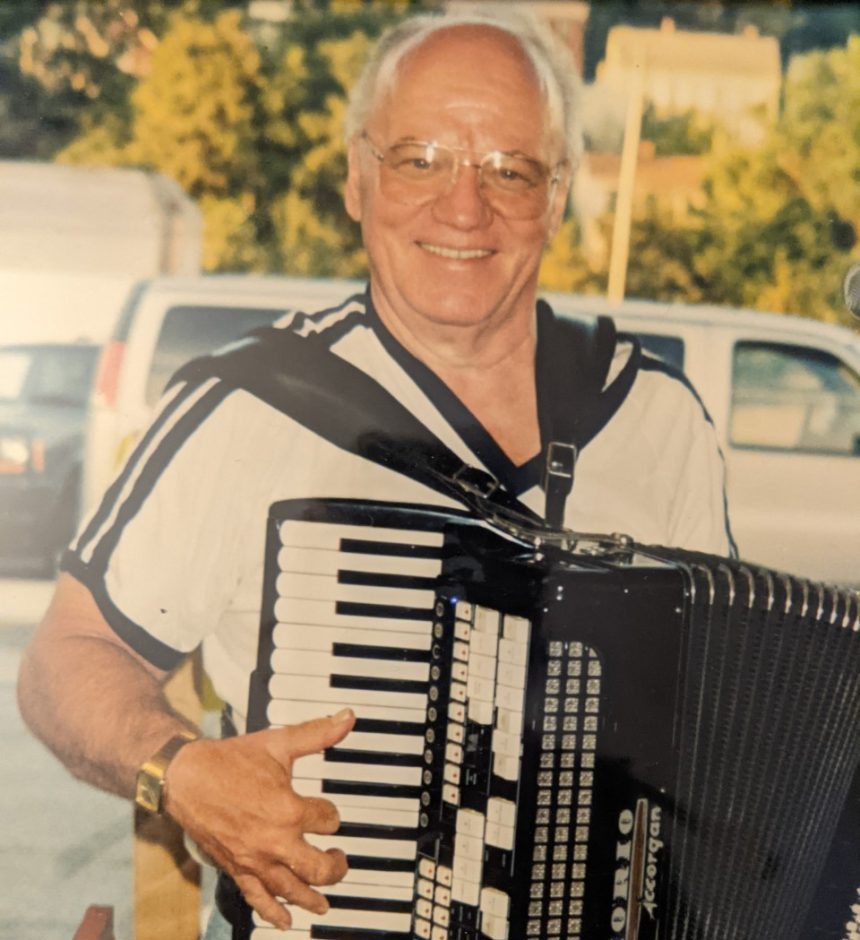 Jerry Intihar is a polka legend in Johnstown. Bork here to Slovenian-Croatian parents, . Jerry began accordion lessons at age 8 and within 6 months was playing at local school, church and Slovene lodge functions. At age 13 he began playing in a group called the “Slovene Polka Chaps” and at age 15 joined the “Harmony Tunes“, a Polish-style polka band. In 1960 Jerry joined the “Eddie and the Slovenes” band which traveled around the country playing at many ethnic functions. He also formed a trio to play local engagements when not booked with Eddie.

In 1972 Jerry formed his present group, “THE JERRY INTIHAR BAND“, and has been entertaining at clubs, weddings, festivals and picnics throughout the country. Although primary a Slovenian-style group, they are recognized for representing a variety of ethnic music — Slovenian, Croatian, Polish, German, Italian, Slovak and others. Country, popular, oldies and rock selections are also featured at some performances. 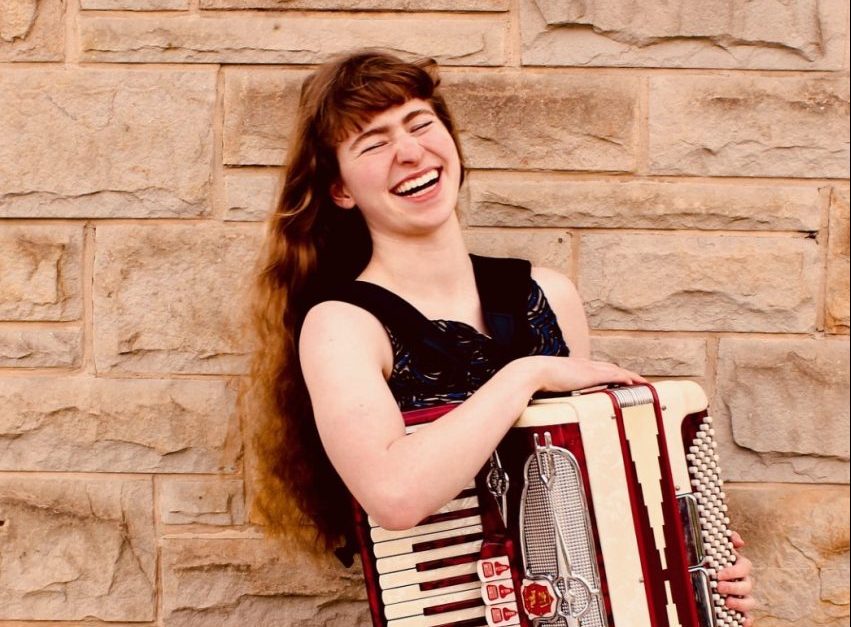 Jessica Schulte has been playing the accordion since 2014, having received one from a cousin who repairs broken accordions. She plays accordion every summer with the Johnstown Reed Band where she is featured on the polkas that the band performs.