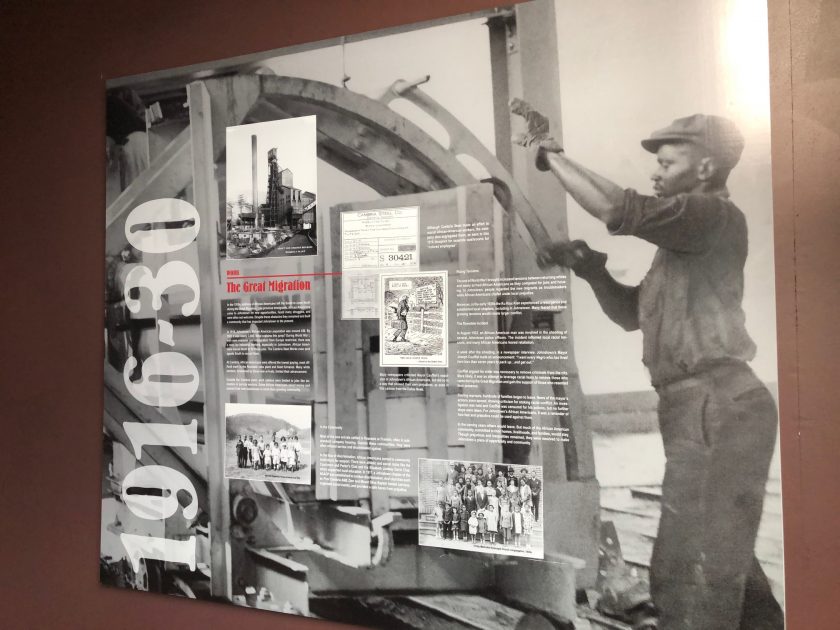 The permanent exhibition at the Heritage Discovery Center, “America: Through Immigrant Eyes,” has received an addition that tells the story of later migrants: African Americans from the South who came to Johnstown from 1916-1930.

“’America: Through Immigrant Eyes’ covers the period from 1880 to about 1914, when Southern and Eastern European immigrants moved here in droves to escape economic pressure and religious persecution,” said Richard Burkert, JAHA president. “We’re delighted to unveil an addition that extends the timeline to the period of 1916-1930, when African Americans first came to the Johnstown region in large numbers.”

Like earlier immigrants to Johnstown, African Americans were drawn by job opportunities afforded by the growing steel industry. The panel tells the local story of a national event, the Great Migration, which is the 1916-1970 period in which more than six million African Americans from the South migrated to cities in the Midwest and North, eager to take advantage of industrial jobs while escaping racial persecution and segregation.

From about 1916, the flow of European immigrants to the United States slowed to a trickle due to World War I and II, but the need for workers continued to increase. In Johnstown, Cambria Steel (and later, Bethlehem) even sent representatives to Southern states to recruit Black workers to fill these positions. In 1910, Johnstown’s African American population was just 450, but by 1923 it had swelled to nearly 3,000.

The panel features information about the discrimination and prejudice the new arrivals faced. At the mill, African Americans were offered the least desirable jobs at the lowest pay, and white workers often limited their opportunities for advancement. African American workers and their families faced discrimination in the Johnstown community as well, including the infamous Rosedale incident of 1923, in which the mayor of Johnstown ordered all African Americans who had lived in town for less than seven years to leave.

The panel is accompanied by historic photos of Johnstown’s African American community. The entire display is located at the conclusion of “America: Through Immigrant Eyes.”

These additions are made possible by the Benjamin Bosler Fund and the Debra Mayer Fund at the Community Foundation for the Alleghenies.

“We are delighted to be able to add to what we offer at the Heritage Discovery Center, despite the pandemic, and encourage people to come out and see,” Burkert said. Other recent additions to permanent exhibitions at the Heritage Discovery Center/Johnstown Children’s Museum include the newly-refurbished 8” rolling mill and the Wentzscope, which allows children to explore microscopy.

The Heritage Discovery Center, which includes the Johnstown Children’s Museum, is currently open Thursdays, Fridays and Saturdays from 10:00 am-5:00 pm.

JAHA’s campaign to replace the Heritage Discovery Center’s elevator, which had a catastrophic failure over the winter, is going up! An emergency GoFundMe fundraiser was launched in January to pay for the $90,000 repair. After raising about $15,000 before the pandemic hit, we are now at more than $41,000. Thank you to all who have donated!