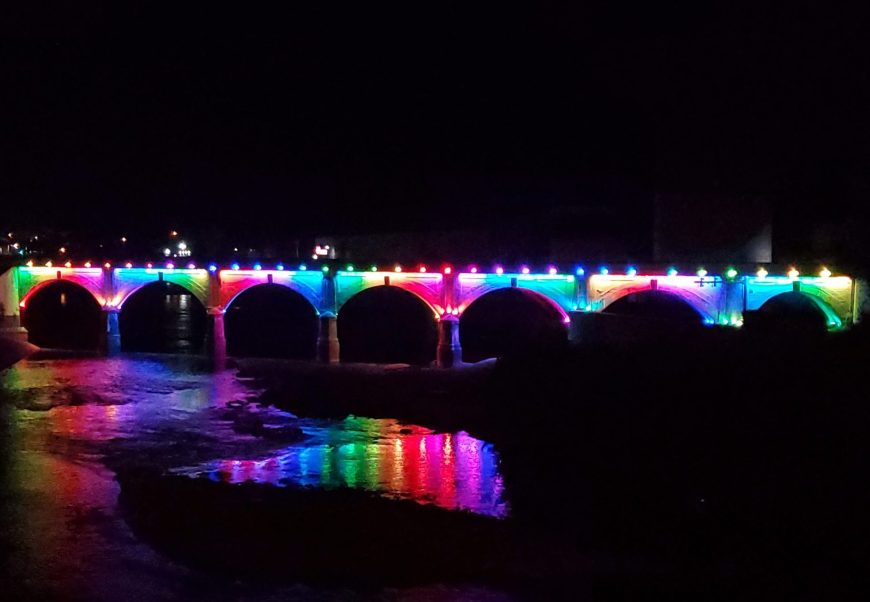 The Stone Bridge lights are now fully repaired and shining brightly for three hours every evening, and the Stone Bridge Project Committee announced today that people all over the world can see the lights in real time with the re-launch of the “bridgecam.” The improvement, which makes it possible for people to view a high-definition livestream of the bridge, is part of a $30,000 fundraising effort to maintain and sustain the overall project.

The livestream, which originates from a camera mounted on the Polacek Pavilion at Peoples Natural Gas Park, is broadcast on YouTube. It is accessible from the Stone Bridge’s section of the Johnstown Area Heritage Association website (as well as below), and made possible through the efforts of Dustin Greene of Top Dog Productions.

About $1,000 has already been donated to the bridge lighting project since the fundraising effort was announced two weeks ago. Letters have just been sent to area households and businesses as the campaign kicks into high gear.

“We had a livestream in the past, but the picture and interface weren’t nearly as good as what we have now,” said Mike Brosig, project co-chairman. “People from across the world expressed their thankfulness at being able to watch the bridge lights remotely, and we think they’ll be thrilled by this improvement and re-launch.”

Dedicated in September 2011, the original $1.267 million project included repairs to the bridge surface, and installation of thousands of LED lights that shine every night in animated, interchangeable colors chosen to match the theme of city events, holidays, health observances and more. The most recent fundraising effort for the bridge lights was completed in 2018. “To perform needed repairs, we had to get into the river channel with a lift, which is expensive,” explained Mike Brosig, project co-chairman. “And while the bridge lights are energy-efficient, we still have electricity bills every month. That’s why we’re asking for the community’s help.”

Fundraising letters are being sent to area businesses and individuals. Donors are eligible for benefits such as lighting of the bridge in the colors in their preferred colors. The full benefit schedule is below:

“The original project was supported by hundreds of businesses and individuals,” Mike Brosig said. “Every donation counts, and we’re asking people to help us sustain the lights for years to come.”

Tax deductible donations to support the project can be made payable to the “Stone Bridge Lights Maintenance Fund” and sent to the Community Foundation for the Alleghenies, 216 Franklin Street Suite 400, Johnstown, PA, 15901.

Or tax deductible donations to support the project can be made to the “Stone Bridge Project,” in care of Johnstown Area Heritage Association, PO Box 1889, Johnstown PA 15907.

Any individual or company interested in helping with the fundraising committee by donating their time and efforts can contact Deb Winterscheidt at JAHA at 814-539-1889. You can also contact Mike Brosig directly by calling 814-659-2733, or brosigm@laurelholdings.com.