The Johnstown Flood Museum tells the story of the 1889 flood — including the town’s triumphant recovery. Educators bringing groups to the museum might wish to access our online curriculum materials at the link below.

Johnstown before the flood 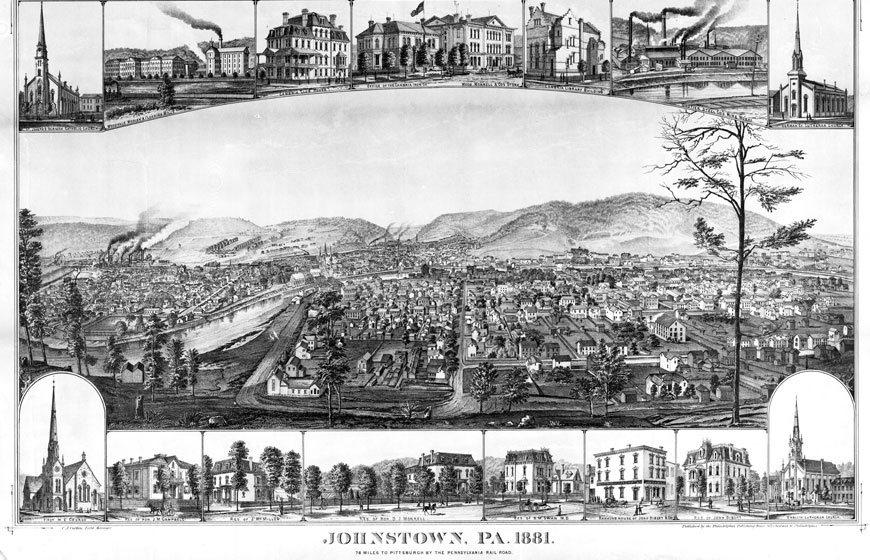 Exhibits explain what the bustling industrial town of Johnstown was like before the flood.

This relief map, interpreted by a museum docent, illustrates the path of the flood down the Conemaugh Valley in both time and space. Light and sound effects illustrate the flood’s timeline, from the time the rains began to threaten the dam until the waters began to subside.

Representations of the flood in popular culture and media

The Johnstown flood captured the public imagination, and representations of the flood appeared in media and popular culture. Photographers took stereoptic views of the flood — two shots of the flood taken from slightly different angles that when viewed through a special apparatus would give a three-dimensional effect.

Janet Gaynor starred in a silent movie called The Johnstown Flood in the 1920s (portions of it are shown in the museum), and even amusement park attractions based on the story appeared at Atlantic City, Coney Island and elsewhere. 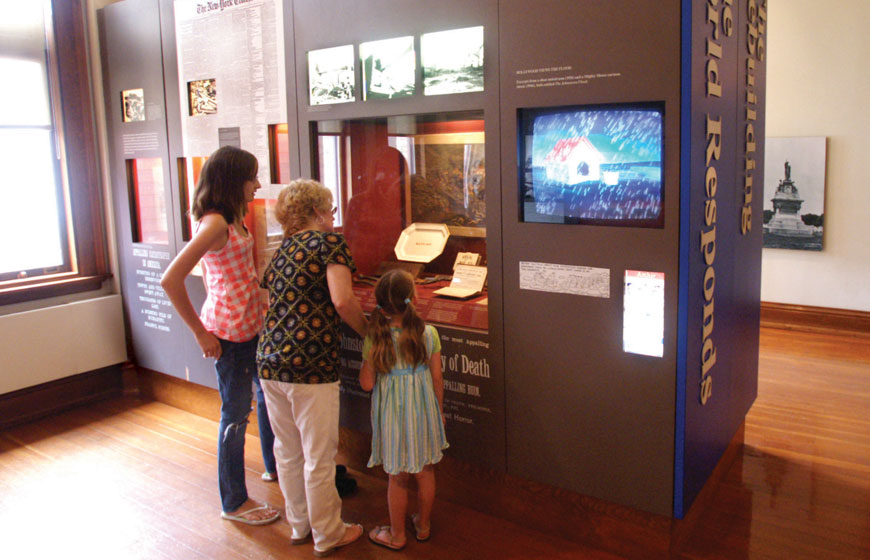 An outpouring of support came from across the world.

In 2000, the Johnstown Flood Museum expanded its permanent exhibits with the addition of an original “Oklahoma” house, one of the first types of temporary houses erected to shelter the people left homeless by the flood. Originally manufactured for homesteaders in the Oklahoma Territory, these buildings were a very early example of prefabricated housing. The one-and-a-half story temporary houses were developed in Chicago and came in two sizes — 16-by-24 feet and 10-by-20 feet. Many Johnstown families combined one large and one small Oklahoma to accommodate their needs. The houses were not attractive — nor were they suitable for the harsh Southwestern Pennsylvania winters. A reporter from the Harrisburg Telegraph, after seeing one of the small structures, described it as “. . . a shell-like affair of drab color and has about as many points of architectural beauty as the coal shed behind a country school house.”

The museum’s Oklahoma house was located in the City’s historic Moxham neighborhood, where it was discovered after its porch caught on fire several years ago. The house shared a lot with a larger residence, which had been acquired by Habitat for Humanity. When informed of the historical significance of the smaller structure, Habitat for Humanity donated the house to the Johnstown Area Heritage Association. The Oklahoma House was moved from the Moxham neighborhood and placed on an existing patio adjacent to the museum.

The Oklahoma was renovated for its inclusion in the museum’s exhibit. A wood shingle roof was installed, several exterior clapboards were replaced, and the exterior was painted. The Oklahoma provides a perfect venue for the museum to exhibit its comprehensive collection documenting the recovery efforts after the Great Flood, which includes home furnishings and domestic items provided by the American Red Cross and other agencies that helped the survivors of the disaster.

The Johnstown Area Heritage Association opened the Johnstown Flood Museum in 1989, marking the centennial anniversary of the flood. In preparation for the opening, JAHA commissioned the internationally acclaimed filmmaker Charles Guggenheim to produce a documentary on the flood to be shown at the museum.

The result is a 26-minute film that won the Academy Award for Best Documentary, Short Subject. It uses JAHA photo archives and recreations of events to explain what happened that fateful day of May 31, 1889. The film, which is captioned, is shown every hour at the Johnstown Flood Museum, in the Robert S. Waters Museum on the second floor. You can see a preview below:

History of the Building

“If the Association will allow me to pay the cost of this restoration, I shall be very grateful to it indeed.” Andrew Carnegie in a November 28, 1889, letter to the Cambria Library Association. The Johnstown Flood Museum is located in a building with an important flood connection – it is the former Cambria Library, built after the flood to replace the earlier library, using funds donated by steel magnate Andrew Carnegie. Carnegie was a member of the South Fork Fishing & Hunting Club, which owned the dam that burst on May 31, 1889, causing the flood. He donated the money to build the museum after visiting Johnstown in late 1889 to survey flood damage, but it’s unlikely he felt any personal responsibility for the flood. Instead, the library became one of the very first of more than 2,500 Carnegie libraries in the world today (as seen above in the slider, in a 1907 postcard.)

The rebuilt library was located on the same site as the old one, at the corner of Washington and Walnut Streets. The Cambria Iron Company donated an adjacent tract of land, where the telegraph office had stood before the flood, to increase the library’s lot. Addison Hutton of Philadelphia, architect for the $55,000 project, built the French Gothic style structure. The foundation of the building consists of 20 massive stone piers of circular section, 5 to 7 feet in diameter. The woodwork throughout the building is select Pennsylvania pine, finished in its natural color. The stairway alcoves on the first floor are laid with white marble tiles, skirted in black marble. The third story features dormers and the building has eight massive chimneys, two on each side.

The first floor of the new library featured lecture rooms, with folding opera chair seating for 300. The second floor housed the “library proper” and two “pleasant rooms,” used for class work and special reading rooms. The third floor featured an elegant gymnasium, with a padded running track, which forms a mezzanine around the uppermost part of the building. During the 1892 dedication and official opening of the Carnegie Library, one guest said: “We find ourselves comfortably seated in a building that is substantial in its material, tasteful in its appointments, convenient to its arrangements, fair in its proportions, classic in its design and beautiful in its architecture.”

The building functioned as a library until it was reopened as the Johnstown Flood Museum in 1973, and it is listed on the National Register of Historic Places.